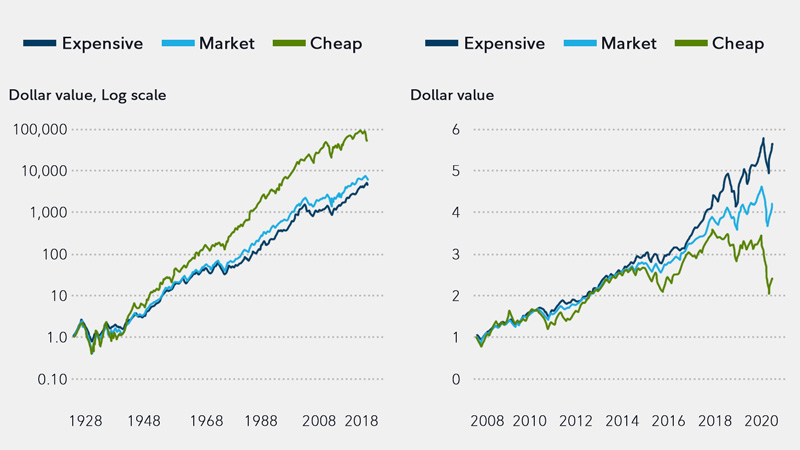 Value stocks vs Growth stocks, which is the better investment?   The debate between value investing as opposed to growth investing is an ongoing one.  Which is better depends on from which point in time you ask the question.   It’s first important to understand what the difference between the two investment categories are.

A value company is one that generally trades lower than its underlying fundamentals suggest that it should be trading at compared to the market or its sector.   They often have higher dividend yields, and trade at attractive (lower) price to earnings ratios (P/E).

Growth stocks are companies that have an expectation that they will grow faster than the average rate of growth for the market.  They typically demonstrate characteristics such as sales and earnings growth that is outpacing the rest of the market or their sector.  They will normally trade at an elevated price to earnings ratio, and generally pay either no dividend income, or have a nominal dividend income compared to the overall market or sector.

Different market cycles have favored value or growth at different times.  Since about 2008, coming out of the financial crisis, growth stocks have been favored over value in most years.  Investors have favored these more expensive companies.

An example of a value stock in todays market would be a company like Johnson & Johnson (JNJ), which pays more than a 2.5% dividend, but is not expected to have the same rate of growth as a company like Alphabet (GOOG); aka Google, which pays no dividend and is considered a growth stock.

However, this cycle is not perpetual.  Over the last 40 years, when the gap between the more expensive growth stocks and the more conservative value companies tends to widen, the cycle typically reverses.   After the great tech bubble implosion that began in March of 1999, the cycle reversed and from 2001-2003 value stocks outperformed.

During the 25-year period between 1990-2015, value stocks were favored.  The returns were as follows:

On an annual basis, value outperformed growth 69% of the time over that same 25-year period, providing for less overall volatility.  This data was similar across large cap, mid cap and small cap indices as well.

Trying to determine when the cycle reverses is essentially a form of market timing.   However, it’s not much of a secret that the recent breakout from the bottom of the market in March of 2020 has been led by a relatively small group of growth stocks that have substantive weighting in the S&P 500.  This may mean that it is time for value companies to catch up.   Perhaps it means that the cycle will continue even longer.   One can never be certain.

If we look at recent pricing on a price to book value ratio, the difference is significant.  During the period ending June 30th 2020, the differences are as follows:

As we can see, growth stocks have already had quite a move upward by comparison.

A look at the chart above provided by Fidelity Investments, which cites data from the University of Chicago’s Booth School of Business illustrates how over the longer term, stocks priced cheaply tend to have better long run performance.  The same chart illustrates how this has not been the recent trend over the last decade.  More specifically, since 2014 the disparity has been rather pronounced.  In this illustration, stocks are broken down by the most expensive quintile, and the least expensive quintile as measured by both price to earnings and price to book ratios.

Looking purely at return is never the sole answer either.  Investments should be looked at on a risk adjusted basis.  In simpler terms, how much more risk is needed to increase overall returns.  Generally speaking, it is fair to say that value companies tend to introduce less volatility into a portfolio than their growth counterparts.   This has been the case through most market downturns.  We saw this play out during the market correction at the end of 2018.

However, the recession and market decline induced by the coronavirus threw many of the historical norms out the window.   Society became extremely dependent on the use of remote technology as citizens were on lockdown, favoring the services offered by the technology sector, which makes up a very big part of the large cap growth space.

Time will tell as to whether or not we are about to see a reversal back into value driven companies in the short term.  We generally favor a slight bias in most portfolios toward value companies as a method to reduce volatility and enhance longer term returns over short term volatility.  This is especially important for retirees, or those closing in on retirement, as they often depend on some form of income from their portfolios.  However, the overall core holdings are a blend of both value and growth across all market caps.  Any attempt to time value vs growth on an absolute basis can result in missing a significant market move.