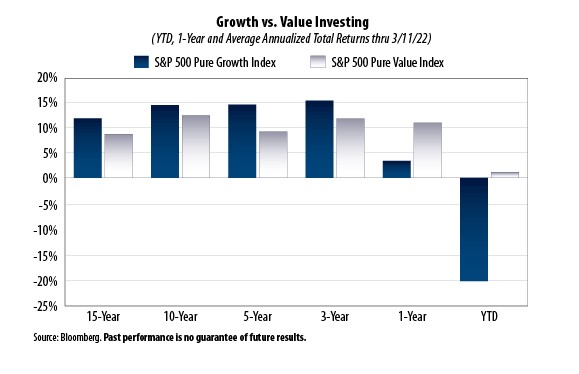 Reversion to the mean is a phrase often used in investing.  It is the statistical phenomenon stating that the greater the deviation of a random variant from its mean, the greater the probability that the next measured variate will deviate less far from its mean.   In other words, an extreme event is likely to be followed by a less extreme event.  Sometimes in investing, these variations can be short term, and sometimes it can take years, or even decades.

Growth investing is about finding companies that are expected to grow their revenue or cash flows faster than the rest of the broader market, and hence their profits are expected to grow at a faster pace.   As growth is the priority, these companies reinvest earnings in themselves in order to expand, in the form of new workers, equipment, and acquisitions.

Value investing is about finding opportunities in companies whose stock prices don’t necessarily reflect their fundamental worth.  Value investors look for companies trading at a share price that’s considered a bargain.  As time goes on, they expect the market will properly recognize the company’s value and the price will rise.

The debate of value versus growth investing is one that has gone on for years.   There is no absolute definitive answer as to which is the better choice.   We’ve seen some data that suggest that given enough time value will outperform, but only slightly.  This was outlined in our September 2nd 2020 article, “Value vs Growth: Which is Better“.   However, that can be over quite a long period of time.  As we can see from the Bloomberg data in the chart above provided by First Trust Portfolios, value has lagged growth for the better part of 15 years until very recently.

The question today is whether this recent change is that inevitable reversion to the mean; or is the recent trend favoring growth stocks still in place?   That is a question that is impossible to answer with any degree of certainty, as is any short-term investment forecast.

Investors often choose between value and growth based on their personal goals.

Investors that want less volatility and more income will often choose the value investing approach.  Investors less concerned about volatility that are more willing to take on risk, and don’t need an income stream are more inclined to choose growth stocks for higher potential appreciation.   A well-balanced portfolio will typically have a reasonable exposure to both.  Choosing exclusively one over the other is a form of market timing that is quite difficult to predict.

The reason for this is that a company’s stock price is simply the value of future cash flows discounted by some interest rate.  A series of cash flows from company revenue that extends way into the future (the numerator), divided by an interest rate (the denominator), is a basic formula for discounting future cash flows back to today to give us a stock price.  The higher the denominator, the more it impacts the potential value of the stock.  Growth stocks are companies that are anticipating higher future cash flow, as opposed to value companies that are already discounted.

One can never be sure about a particular trend in the market, just as we can’t be sure of the trend in interest rates which play a role in the outcome of how these two areas of the market behave.   It was only in the year 2020 that growth stocks outperformed value stocks by the widest margin on record.  According to Morningstar, the average large cap growth fund returned 34.8% in 2020, while the average large cap value fund returned only 2.8% the same year.

This data from as recent as just 2020 could have easily led an investor to abandon their value stocks or funds out of frustration, and yet here we are in the first quarter of 2022 with the exact opposite result.

In the end, the best approach is always a diversified portfolio that maintains a good mix of dividend paying value companies along with a growth side of the portfolio.   Regardless of the asset class, given enough time, there will likely be a reversion to the mean.