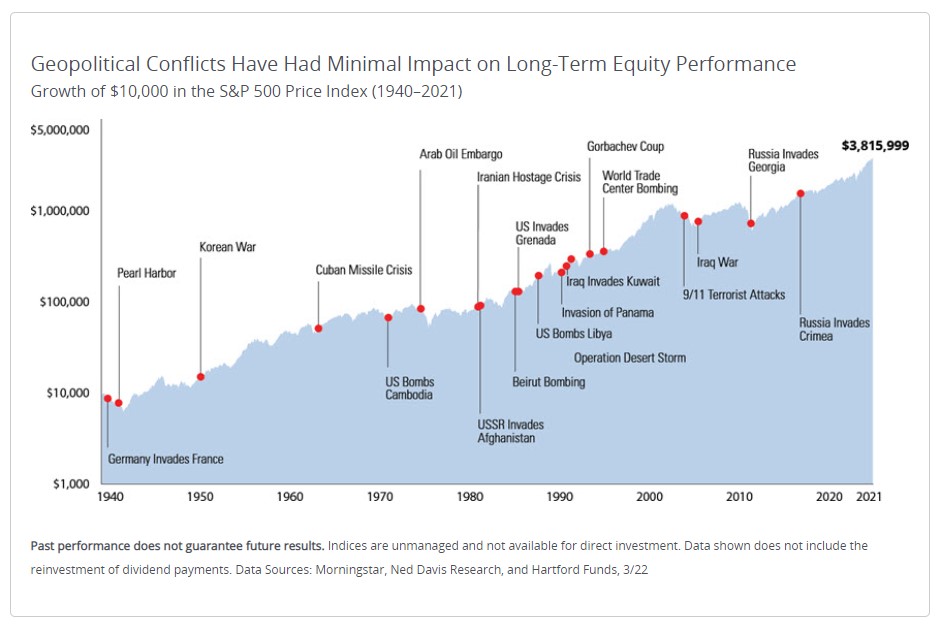 We often say that financial markets are the equivalent to a massive financial ecosystem in which no one event or action tells the entire story.   However, there are often singular events that can have a more substantial impact on the behavior and price action across the markets.  Sometimes these are positive events, and sometimes negative.   We tend to remember the negative events more than the positives, as is our nature as human beings.   This is particularly true when it comes to financial markets, since they tend to take the escalator on the upside, and the elevator on the downside.   As it pertains specifically to geopolitical events such as a military conflict, like every other event, they have had no substantive impact on the long-term returns of financial markets.

Looking at the above slide provided by Hartford Financial, we can see numerous military conflicts which have occurred since from World War II through the present day.   The data clearly demonstrates the nominal impact military conflicts have had on long-term results.

While it’s true that the longer-term impact has been essentially non-existent, that is not to say that the short-term impact is irrelevant.  We often discuss the risk of volatility in a portfolio, and particularly how it may impact the results of an investor that is currently dependent on their investments to generate an income stream.   A prolonged downturn can have an impact on such a scenario.

Let’s look at how well markets did in the immediate aftermath of some of these major events.

According to Morningstar and Ned Davis Research provided by Hartford, these are the annualized returns of the S&P 500 in the one, three, five and ten years following the below referenced events: 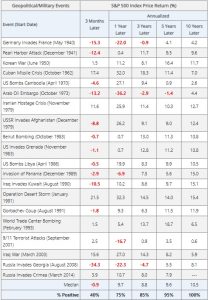 As we can see, in each of these examples, the three-year return was a positive annual return, with the exception of 3 periods.  One of which was 2008, which had little to do with the invasion of Georgia, and quite a bit to do with the global financial crisis.

What is clear from the data is that even in a relatively short period of time, markets tend to rebound significantly after a military conflict.   The above examples also assume a 100% exposure to the S&P 500 as your sole investment.   In reality, it is highly probable that anyone dependent on their portfolio for an income stream would own various assets, including that of fixed income which tends to be far less volatile in times of economic and financial stress.  As a result, the time it would take to recover from any portfolio losses is likely even further shortened.  Additionally, this data reflects only the price return of the S&P 500 and does not reflect the dividend yield, which would have turned the 3-year return following 1940 and 1973 into a net positive period.

None of this is meant to minimize the human cost of any military conflict and how it impacts those that are forced to endure the horrors experienced in the theatre of combat.  However, as an investor it is important to take into account the best way for you to proceed during periods of volatility regardless of the cause.

As long as markets exist, asset prices will rise over time.  Unless the next military conflict is a nuclear holocaust that wipes out the majority of the world’s population, or the free-market system is completely abolished and replaced with some form a centrally planned global state, then markets are likely to continue to rise.  Ultimately, as we often suggest, it is not wise to bet on the end of the world, since it only happens once.