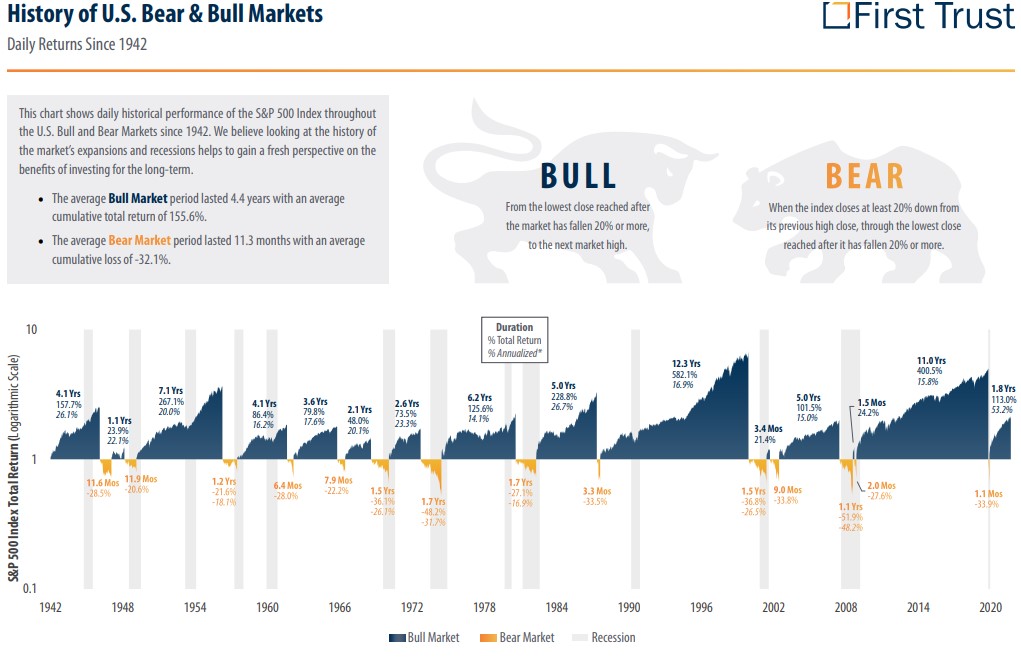 In recent weeks we’ve heard more and more talk of the U.S. entering into a recession.  As expected, many investors are concerned about the implications of a recession on their investment portfolio.   In order to understand what might happen in the future, it’s helpful to look at what has happened in past recessions.

Recessions happen approximately every five years or so.  However, they do not necessarily happen in a linear fashion with every fifth year turning negative.  They are more random than that.  Sometimes they can be grouped more than one within five years, and sometimes it can be more than a decade before the next recession.

What is a recession?  Well, historically the textbook definition of a recession was generally defined by two consecutive quarters in which the Gross Domestic Product (GDP) of the United States contracts rather than expands.  GDP is a measurement of overall economic activity.  After the 2008 financial crisis, the National Bureau of Economic Research (NBER), a private non-profit group re-defined the definition of a recession as a “significant decline in the activity spread across the economy, lasting more than a few months”.    NBER somehow became the official arbiter of what is or isn’t a recession.  The U.S. has now officially seen two consecutive quarters of negative GDP growth in the first two quarters of 2022.  It remains to be seen if this is the first time in history in which GDP has contracted for two quarters, and we are not in an “official” recession according to the NBER.

A recession can be triggered due to numerous things such as fiscal or monetary policy mistakes, and/or non-economic exogenous shocks to the system, such as the 2020 lockdowns, or the 9/11 attacks.

More importantly, the question is what is the impact to the investor, and the public in general?  As it pertains to financial markets, the good news is that the market tends to serve as a discounting mechanism.  This means that the market is attempting to anticipate good or bad news before it becomes a known certainty.

As we can see from the data above provided by First Trust Advisors LP, more often than not the market decline precedes the recession.   This would likely explain the negative start to 2022 that put financial markets into “Bear Market” territory, which is generally defined as a 20% or more decline in the market.

There have been times when the market has declined by 20% and a recession did not follow, though that is less common.   There have also been recessions that didn’t see a 20% decline preceding the recession.   What we can also see from the data above is that the average bear market lasts only about 11.3 months, while the average bull market lasts 4.4 years.

We can also see that most often the market recovery begins before the economic recovery.    Based on the historical data above, there is an excellent chance that the majority if not all of the recent decline that has preceded this current recession may already be done.   This is not a certainty, because we can never tell for sure how deep and long lasting the recession will be.   It’s entirely possible that the third quarter may also be a negative quarter for GDP.  It’s also possible that this can be an extremely short-lived recession, not unlike 2020.   However, regardless of the depth and length of the recession, it is highly probable that the markets will have recovered long before the economy has recovered.    This is what makes market timing so difficult, and precisely why we don’t endorse such an approach.

If the U.S. slides further into contraction, there could be more downside left to stock prices below the recent lows.  If the recession is short lived, then we have probably seen the bottom of this recent downturn.   It’s also important to note that this recent market downturn will not be the last, nor will this be the last recession.   If you are a 65 year old that recently retired, you could very well live another 30 years into retirement.  This would mean that statistically you would be likely to see about six more recessions in your lifetime, and probably many more market corrections along the way.

In an economic sense, while the market tends to recover first, the economy usually lags somewhat.  This is why data points such as unemployment figures tend to be a lagging indicator of economic growth.  The layoffs don’t generally start to any significant extent until the slowdown is present and demand declines.   So peak unemployment in the business cycle is usually at the end of the recession, or when the recession has already ended.   In fact, when a recession is short lived and confined to just two quarters, you sometimes don’t officially know you’re in a recession until it’s already over.

We cannot say with any degree of accuracy if this will be a prolonged recession, and frankly, neither can the “experts”.    Let’s remember that entering the summer of 2021 the vast majority of economists believed that inflation was “transitory”.   We were a bit more concerned about inflation and believed this to be a longer lasting problem that will still likely take at least a couple of more years to fully work through.   Coming into 2022, very few economists were predicting a recession, with most believing that we would not slide into negative GDP territory until 2023 at the earliest.   Yet here we are in a recession with the “experts” being wrong yet again.

The economy is a massive financial eco-system in which millions of possible variables impact millions of possible outcomes.   More often than not, “expert” opinions about the short term are ambiguous and generally not very helpful as it pertains to investment decisions.   When it comes to making short term predictions, we would suggest that there are no experts.  As it pertains to managing money, we take a long-term strategic approach to investing using proper asset allocation to address risk management and avoid market timing.   The markets have shown they are remarkably consistent over the long term.  However, in the short term, it’s important that you know enough to know, that you just don’t know.