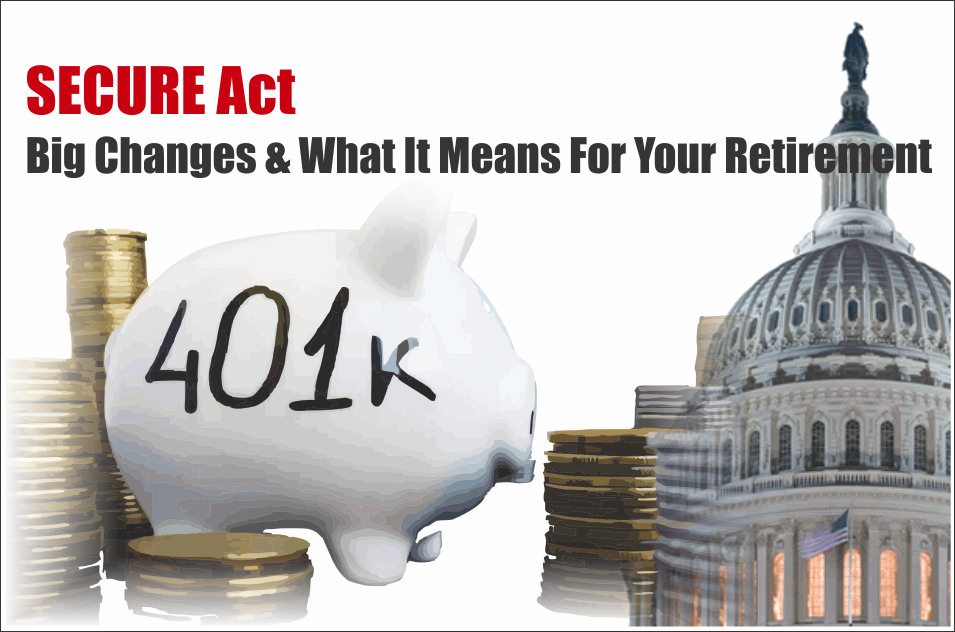 On December 20th President Trump signed into law the SECURE ACT, a bill which received a significant amount of bipartisan support in the United States Congress.  The new legislation makes some significant changes that impact retirement plans for all Americans.   Like all legislation, there will be pros and cons, and ultimately it will have some yet to be realized unintended consequences.

Among the more positive aspects to the new legislation, the following changes have been made:

IRA contributions for those that still have earned income will no longer be capped at age 70 ½.  The age restriction has been lifted.   If you or your spouse are still working, you can contribute to either a Traditional or Roth IRA.

Required Minimum Distributions (RMD’s) will no longer be mandated at age 70 ½.    The new requirement for the RMD to begin is age 72.  This is an advantage to those who were drawing an income from their retirement accounts only because it was mandated and had no need for the income.  The new rules will permit individuals the extra time for tax deferral.   It should be noted that the investors who were already subject to the RMD and had begun the income in the year prior will not get the delay.  If you have already begun your RMD, you must continue to take it.

401k access will be expanded to more part time employees of corporations, as well as allowing small business owners to auto enroll participants, and even gives a tax incentive in the form of a $5,000 tax credit for doing so.     Additionally, beginning in 2021, business owners from totally unrelated industries will have the ability to pool their resources together to form an employer-based savings plan.

Penalty free IRA withdrawals can now be taken up to the amount of $5,000 for the purpose of childbirth or adopting a child.

529 college savings plans will now permit students to withdraw as much as $10,000 over the their lifetime to cover the cost of student loans, as well as apprenticeship programs.

Graduate or post-doctoral students receiving income in the form of a fellowship or stipend can now treat these benefits as earned income for the purpose of making a retirement contribution.

The one Very Big negative as it pertains to this new legislation is the elimination of what is know as the “Stretch Benefit”.  This is a benefit afforded to the beneficiary of a qualified retirement plan or IRA that inherits the plan from a non-spouse.    When a spouse inherits such a plan, they can simply transfer the balance of the account to their own IRA as if it was theirs all along, with no differing treatment in the application of the rules.  However, since the tax act of 2001, non-spousal beneficiaries have been permitted to withdraw the asset over their actuarial assumed life expectancy, which minimized the tax impact to the beneficiary.

Under the new rules, the balance of the account must be liquidated within a period of ten years.  The beneficiary will have the option of spreading the income out over the ten-year span, taking it all in one year, or in any sequence they wish.  As long as they have withdrawn all the assets within the ten-year time frame, they have met the requirement.   Regardless of how they take the income, the disbursements are treated as ordinary income from a traditional IRA or retirement plan, which greatly accelerates the tax liability along with the income.

A key aspect that should be noted is that the beneficiaries who have inherited these accounts from a decedent that has passed away prior to 2020 will be grandfathered into the old rules and still enjoy the stretch benefits for the duration of their lives.   Additionally, stretch benefits remain in effect for a beneficiary that is a minor, less than 10 years younger than the decedent, or one that is disabled.

Because of the accelerated tax impact on beneficiaries, the case for doing Roth IRA conversions will be stronger in many scenarios.  Many retirees who do not need the income may now find it more prudent to convert a portion of their retirement accounts annually while they are retired and possibly in a lower tax bracket then that which their adult children may be subject to when they inherit these assets, which is commonly during their prime earning years.

As with any change in the tax code, this will impact some investors differently than others, and some not at all.    At Landmark, we believe this is something that should be addressed collectively with your financial advisor, tax advisor and estate planning attorney.