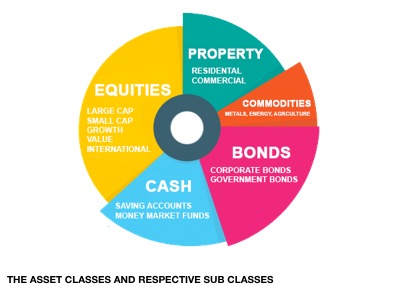 The concept of asset allocation was made famous by the economist and Nobel laureate Harry Markowitz and his introduction to Modern Portfolio Theory (MPT).  The principle idea behind MPT in simple terms is the notion that an investor can maximize their returns within a given level of risk with the use of multiple asset classes.  Under this premise, an investment is not evaluated on its own, but rather how it affects the overall portfolio when added to the other investments.  One of the key variables is not just the historical performance of an investment, but how it correlates to the other investments in the portfolio.  In lay terms, does the new added investment move in the same direction at the same time as the other components.  Correlation is a mathematical measurement of how assets move.  A correlation of 1.00 are two assets that move in perfect tandem.  A correlation of 0.00 means when one asset increases, the other does nothing.   A correlation of -1.00 are to assets that move precisely the opposite.

The lower the correlation, the less frequently the two assets move in tandem.  A lower correlation is important, because as one investment does well, it offers the opportunity to do some profit taking, and add to another investment which is temporarily out of favor, also known as rebalancing.   If an investor can maintain a lower correlation, they can produce more stability in their portfolio.  This becomes extremely important when drawing an income stream from a portfolio.

One of the challenges in building a portfolio is that historical norms are not necessarily reflected in the shorter-term data.  A quick look at the longer-term comparison of various areas of the market show that small cap and mid cap stocks outperform larger cap companies.

The recent 10-year and 5-year returns through March 31st 2020 show the following:

What can be seen in the recent data is US Large cap equities have produced higher returns with less volatility in recent years.  This is especially true for the 5-10 year data, which ends in March of 2020, a period that was much more harsh for Small cap equities as the effects of the government lockdown took effect.

Yet, what we know is that current trends are not always indicative of the future.  Other asset classes such as foreign equities have also underperformed US markets for some time.  We have also seen the correlation between US and foreign equities rise.  Over the last 10 years, the S&P 500 has maintained a high correlation with the MSCI EAFE index of about 0.85.  While it’s reasonable to expect that with a much more global economy that is quite interconnected as compared to even 50 years ago, correlations will remain high.   That does not necessarily mean that US market will consistently continue to outperform.  They may or may not continue that trend.

We see from other asset classes like Real Estate Investment Trusts (REIT’s) that the correlations to the S&P 500 remain moderate.     During the recent period of 1999-2019 the correlation between the S&P 500 index and REITs was about 0.65, while REITs returned 9.90% per year, making it an excellent diversifier.

With each corresponding asset class, there is a trade-off of risk versus return.  However, the data stills suggests that a diversified approach of incorporating all of these assets into one integrated portfolio will produce the least amount of volatility.    Just as it is not prudent to attempt to guess when to get in or out of markets, it is also not wise to assume that you will know which are of the market will lead over the next decade.  It may be time for Emerging Market equities to lead, or perhaps Developed International markets.  If all of the recent new money creation leads to inflation, then Commodities would likely be a leader.   Many believe that Small Cap equities are primed to lead over the next several years.  Then there is always the endless debate of Value versus Growth companies.  Asset classes are very much cyclical.   Sometimes the cycle will last a few years.  Sometimes for a decade or more.  Since there is no plausible way to be certain, the principles of Modern Portfolio Theory still apply to any sound financial plan.